Anna and Szilard designed a thrilling escape room game from scratch, and you can too! Wanna know how? Read on!

Oh no! A dark wizard has swooped in and stolen all of the dragon eggs! Quickly, solve his puzzles to break the spell and save the dragon eggs, before the poor baby dragons freeze!

Or make your own with this free Game Designer's Kit

The High Wizards Were Looking For A Champion 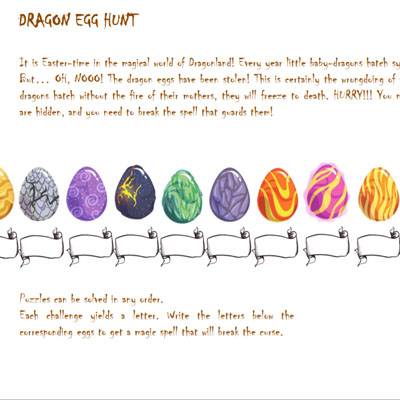 Dani was upset. You see, it was nearly Easter, but there was no way that Anna and Szilard's little brother could go see Grandma. At least, not without accidentally spreading the plague (which is nowhere near as much fun as escaping the zombie virus!)

It was at this time that the High Wizards began their contest of champions - to see who could design the greatest escape room game.

So Anna and Szilard stepped up!

And their clever workmanship shows! Their intuitive but challenging puzzles had our escape goblins skittering around the Citadel for weeks searching for lost dragon eggs.

So naturally, we wanted to learn more about the enigmatic masterminds behind our favorite Easter game.

Let's get to know Anna and Szilard:

What is your favorite dragon?

In real life we both love bearded dragons. Out of the fantasy dragons probably our favourite is Hiccup?s Toothless (in How to Train Your Dragon).

But we?ve also seen among the contest submissions that there is another game that has a dragon (or at least a hint to it), Caesar, and that was a really good game, so it goes to our favourite dragon list! (We checked out all the fan-made games that appeared on your website and most of them were really really good!)

If you could use one magic spell, what would it be?

I (Anna) say that the Accio spell from Harry Potter would be very useful for me in daily life, as I tend to not find where I put my things.

Szilard says that if we can only choose one spell that it should be something more powerful, like a healing spell to cure all illnesses. 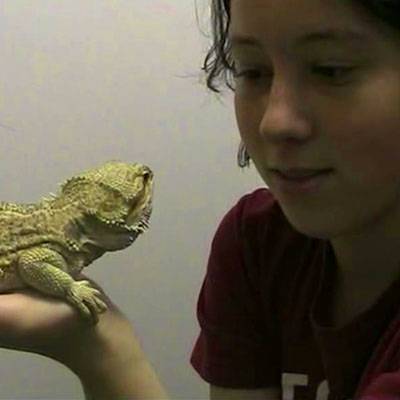 This is Anna. Hi Anna! (I know what you're thinking - and no, Szilard is not the one in Anna's hand, he's the one taking the photo!)

Q1. Can you walk us through your design process?

It's scary at first because it's something we haven't done before. But we went through the material on your webpage and it really helped to get a picture of how this could be done step by step. 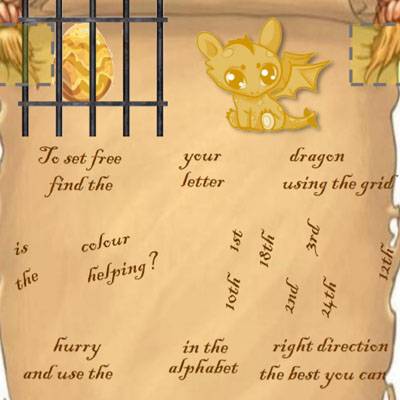 We first decided that as the game would be for Easter, essentially it should be an egg-hunt. But we still wanted to give it a cool theme, so we came up with a little story about stolen dragon eggs.

We were long debating the structure of the treasure hunt, the first idea was to make it sequential so that one solution will lead to the next clue and all solutions together would allow the players to deduce something in Sherlock style. But then we opted for something simpler, where there was less room for error in the design, this is how we have now independent puzzles that each give one letter towards the final solution.

We also had in mind that it should be easy enough for our little brother to succeed.

Coming up with the actual puzzle ideas was a lot of iteration, we knew we wanted it to be as varied as possible, but that?s tricky to do in practice.

We wanted to include things to physically manipulate (like cut, fold, colour), but also others where it was more about noticing something or searching.

We drew the ideas on paper, then we searched online for images, and used our limited computer skills to achieve a look as close as possible to that we liked. 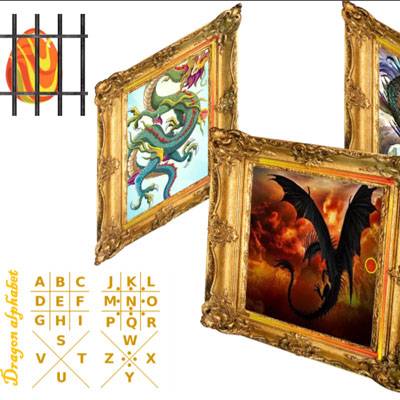 We also have a bunch of handy guides too!

Then we printed out the game and solved it ourselves to find out where it didn?t work (and we did find quite a few mistakes!).

We even dropped a couple of puzzles that did not seem good enough on second thought.

So we corrected and re-designed and then printed again.

It took about half a dozen rounds of testing before we both were satisfied with the result.

Q2. What was your favorite part of designing your game?

Our favourite part was seeing our brother enjoy what we did

...and perhaps the anticipations when the game was ready and we waited for the big day to come - so if you get feedback from other people who play it, we'd really love to hear!

Other than that we enjoyed the whole process of making the game. Before the lockdown, we did not spend this much time together and now we had secret meetings coming up with the theme, drafting the story, then brainstorming puzzles. We sat together in front of the computer and it was a great bonding to do something good together. (Of course mom and dad knew, so they allowed us more computer-time ? )

Q3. How did you set up the game in your house?

We organized a surprise egg-hunt for Sunday morning, so we got up early and arranged the scene.

We live in a relatively small flat, so we decided to hide well the twelve cards with the puzzles (e.g. in a book, under the carpet, etc), but we had a few little chocolate eggs nearby so they were not that hard to find.

Mom and dad were helping Dani, but we did not tell them the solutions in advance, sometimes they were just as puzzled as our little brother!

Also, we had one modification compared to the game we submitted for the contest: the video they got in the end was one that we recorded wishing them a happy Easter. (It?s super-easy to upload a recording to vimeo and make it password protected, so anyone playing our game can make it personalized this way.)

NOTE: If you enjoy scavenger-hunt games like this one, you may enjoy our time-travel adventure, Quête d'Évasion. 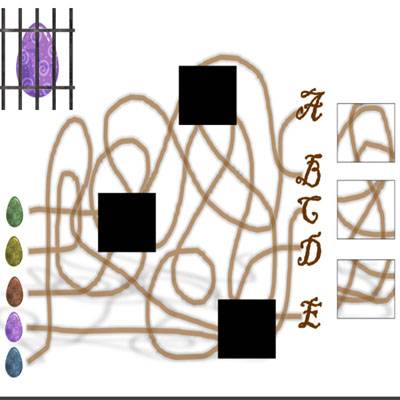 Q4. How hard was it designing your own game?

It was scary at first, and we were a little lost not knowing how to begin. But once we started it didn?t feel hard.

It was a lot of work, but it was all fun. After a while we started seeing codes wherever we looked, and we spent entire days thinking about new puzzle ideas. 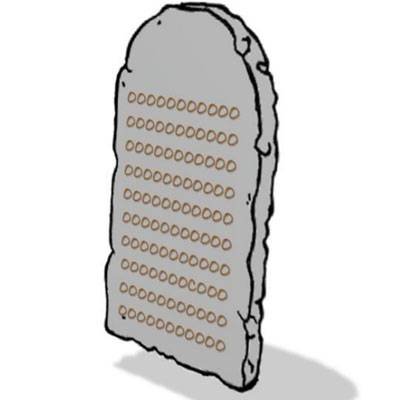 We could see that he very much enjoyed the game, and seeing him this happy was all we needed.

He didn?t say much, but at his age that?s normal.

It was surprising to see that some of the puzzles we intended to be hard he solved very quickly, while he struggled with others that we felt were not so hard.

We suspect that he expects us to do another treasure hunt for his birthday in July ? 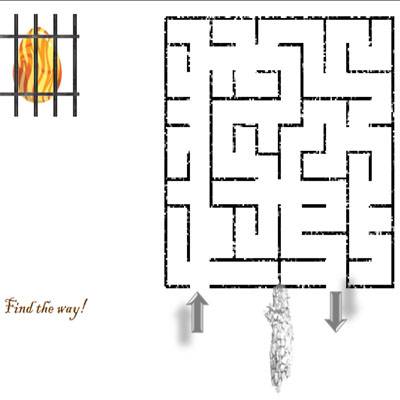 Q6. So... do you know what you're going to do with your prize money?

Yes! We had planned to go visit our grandmother for Easter, which we could not do because of the lockdown.

So once this is over, we are going to book that trip and pay it with our own money! 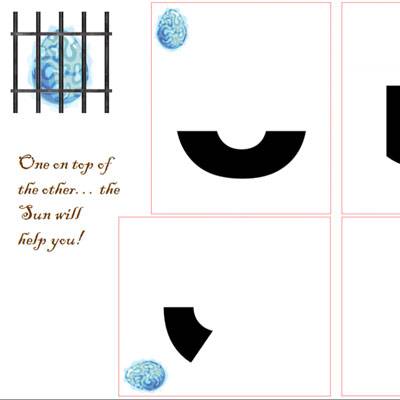 Q7. Do you have any tips for other kids who might want to make their own escape room game?

We think that everyone should try and make their own escape games!

We got the idea because of the contest, but we are already working on another game, it?s so much fun!

For us what helped to get started was to look at the LPS website for tips, and it?s probably a good idea to play a few of these escape games to get some inspiration.

Also, it helped that it was the two of us working on the project, there were a lot of ideas we dropped because one of us did not like it, and eventually it made the game better to work on it until both of us loved every element. 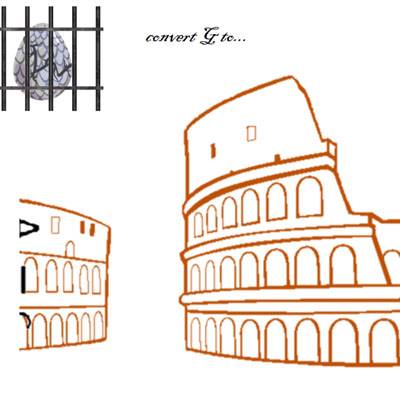 Seem like a daunting task? Get started with a template: 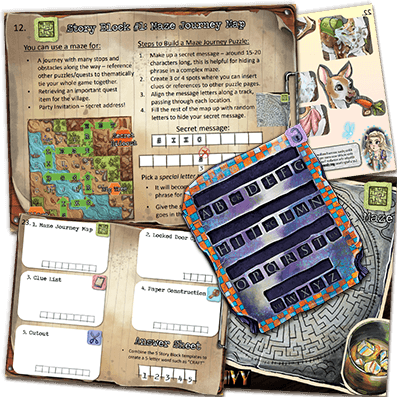 You're not in this alone. We've crafted a Master Class that will walk you through every step of the way.

Use these printable templates, puzzles, and props to design your very own escape room experience!
CHECK OUT THE ROOM MASTER CLASS

Welcome to the Order...

Your valiant efforts have forever immortalised you in the annals of our prestigious Order. The High Wizards count you among their closest allies in their quest to bring fun escape magic to the world. From now on, you will always have a place in the Citadel of Escape Magic.

Now it's your turn!

What are you waiting for? You can jump right into a world of devious masterminds and inventive puzzles.

Just follow our step-by-step guide. We even have a free downloadable template to kickstart your adventures!

Alternatively, you can ease yourself in with a printable escape room kit.

They're a perfect way to experience solid game design principles first-hand. What's best, is that each kit is completely editable to jumpstart your creative endeavour.